Bude is a lovely coastal resort in North Cornwall and is home to several B&Bs for visitors to the area. It became popular during the latter half of Queen Victoria’s reign, as sea bathing became a popular trend amongst the upper and middle classes, and as a result there are plenty of period houses.

In fact, I was recently contacted by a lucky Bed and Breakfast owner who had uncovered this late Victorian tiled hallway and entrance lobby which was around a hundred years old during renovation work. It had been under carpet for at least twenty years and had a variety of stains including paint, tar and glue!

The customer rightly wanted to reinstate it as a showpiece to greet clients upon entering the upmarket guesthouse but had no luck trying to remove stains themselves and had spent many hours on hands and knees but to no avail and were nearly ready to take the builder’s advice and cover it in a self-levelling cement and install a carpet throughout which would have been sacrilege! 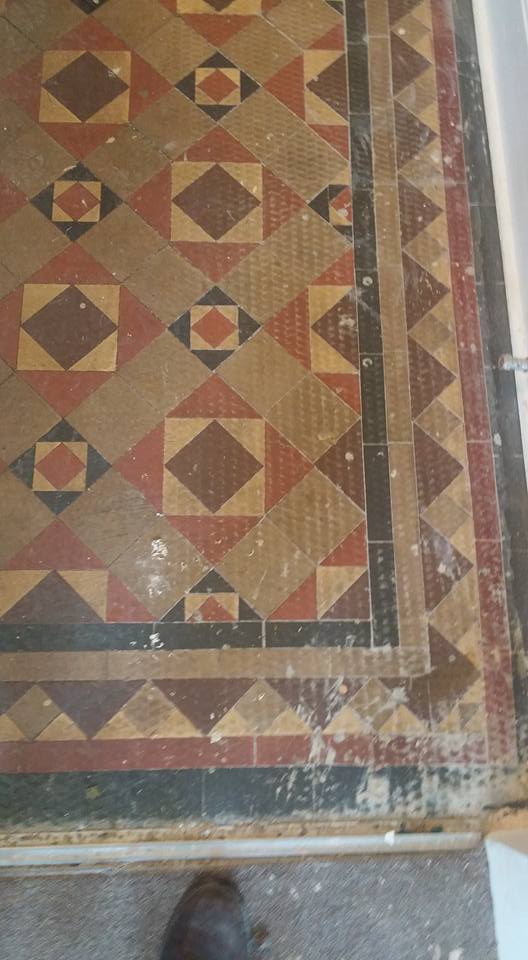 To begin with diamond-impregnated buffing pads were used with a rotary machine to scrub the floor and open up the pores. Small diamond hand blocks were also used to get into those difficult to reach areas such as corners and under the stairs.

Afterwards the floor was thoroughly rinsed with water which was then extracted using a wet vacuum. This was followed by giving the floor an Acid rinse using Tile Doctor’s Acid Gel. This helped to remove old mineral deposits and residue from carpet underlay. I had to be careful not to leave the acid down for too long because these tiles are susceptible to acid damage. This is also a great product to use as par for the course on floors like this that don’t have a damp proof course (floors generally didn’t pre-1950s) and the acid will neutralise any salts coming rising up through the tile later.

Dealing with salt issues on these old floors (efflorescence) is essential because they can damage the sealer or become trapped under it, detracting from the beauty of the floor. Given the age of the house It’s difficult to know what the floor had been laid onto. Often it was compacted rubble and building works from the erection of the adjoining houses. Terraced and some of the later Victorian floors were laid on a wet limecrete scree which contain a high salt-content.

Once the tiles had been cleaned, I rinsed the entire floor thoroughly using fresh water to remove any traces of chemicals, before leaving it to dry completely overnight.

Upon my return to the B&B the next day, I sealed the tiles using several coats of Tile Doctor Colour Grow, an impregnating sealer which provides robust protection and intensifies the natural colours in the tile. It does this while leaving a natural-look matte finish which is befitting of a classic Victorian geometric patterned floor like this one.

Now cleaned and freshly sealed, the Victorian tiles will be in a much strong position to cope with the busy B&B season over the Summer. The owner was very pleased and I’m sure visitors to the B&B will be very impressed with this original feature! 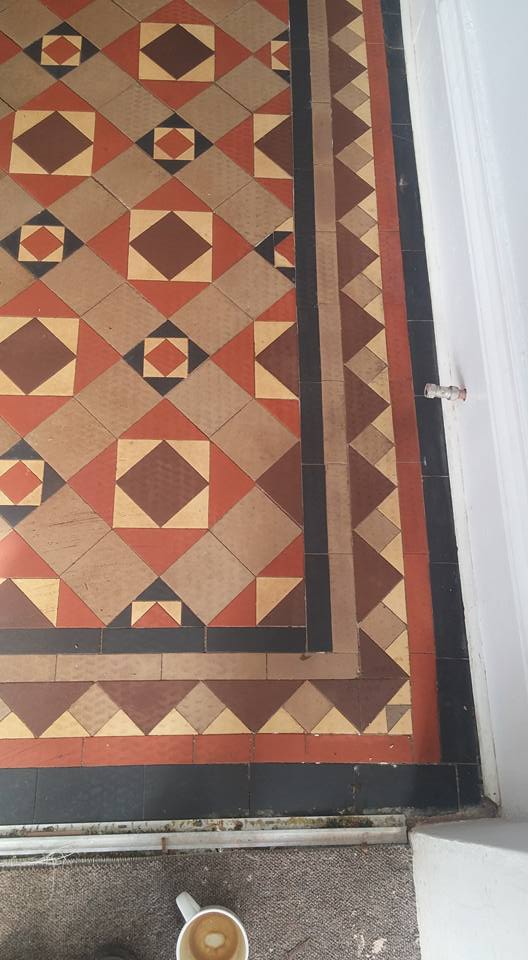 As part of the package a cleaning and maintenance guide is provided once the work has been completed but unfortunately the owner’s uncle didn’t consult this when house-sitting and attempted to clean the floor with white spirit. Fortunately, I was able to return and improve the damage that was caused much to the owner’s relief and just in time for opening!