This story follows on from a previous post on the renovation of a Victorian Tiled Reception Area at a listed Georgian Townhouse in the middle of the small market town of South Moulton in North Devon. You may recall he was struggling to clean the floor in the reception area and I was called in to sort it out. Whilst I was there he also asked me to deep clean and seal the Kitchen Quarry Tiles.

Kitchens as you can imagine are one of the busiest areas in any house and as a result the floors do see a fair amount of wear; in this case the Quarry tiles were dull and lifeless and I suspect any previous sealer had long since worn off. 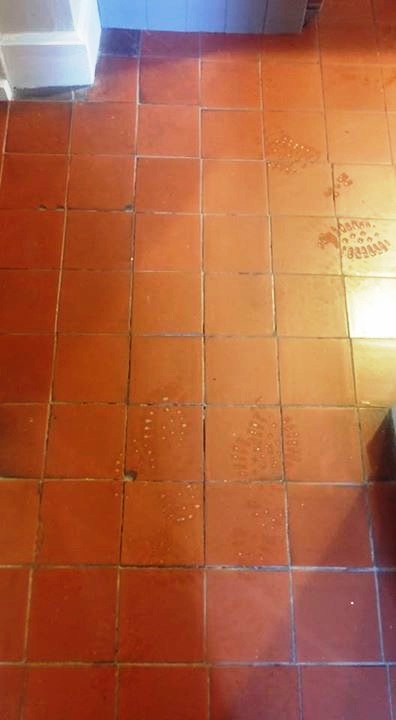 The Quarry tiles were in a better state than the Victorian tiles I discussed in the previous post so a less aggressive course of action was required. In this case I applied a strong dilution of Tile Doctor Pro-Clean and left it to soak in. Pro-Clean is an effective tile cleaner which will clean and strip off old sealers in a strong dilution. This was important as I wanted to be sure any remaining sealer would be removed, typically sealers wear off in the high use floor areas first so it was quite possible some sealer would still be present on the less used parts of the floor.

After ten minutes I agitated the solution with a black scrubbing pad fitted to a rotary scrubbing machine to really get the floor clean and then rinsed off the soiled cleaning solution with water and a wet and dry vacuum before leaving it overnight to dry off fully.

The following day I returned and after rechecking the moisture levels to ensure that they had adequately dried out I started to seal the Quarry tiles in the Kitchen using Six coats of Tile Doctor Seal and Go which leaves a satin finish once dried and gives the tiles a freshly mopped or slightly glazed look. 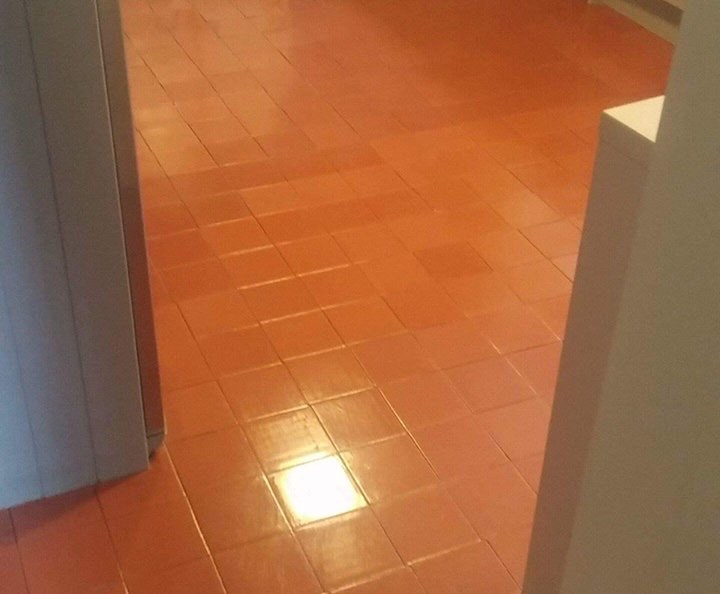 The customer was thrilled and left the following feedback on the Tile Doctor feedback system:

“The work was carried out in a professional manner, with excellent results.”

For aftercare I left the customer with some guidance on care and maintenance of the floor as well as a suitable bottle of tile cleaner.

Professional Renovation of a Quarry Tiled Kitchen Floor in Devon

I was approached by the owner of a listed Georgian Townhouse right in the middle of the small market town of South Moulton in North Devon who was struggling to have any impact on the appearance of his Victorian tiled reception area, despite hours of back-breaking scrubbing and had become disheartened by it. 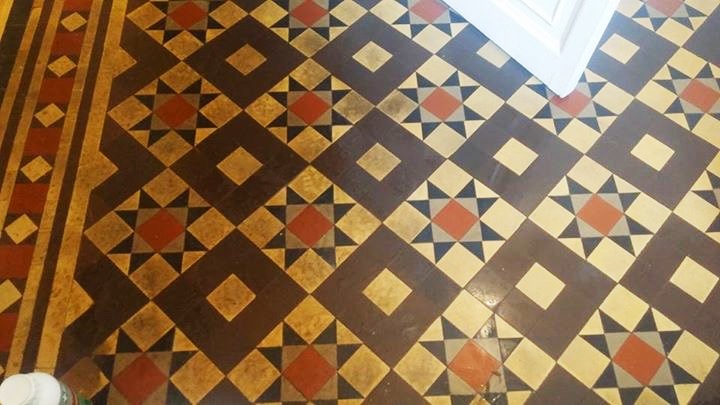 Upon arrival a survey on the floor was conducted where I tested the moisture level of the tiles because floors of this age and construction didn’t have a Damp Proof Course and as such were just tiled onto whatever subsurface was already there, which quite often contained rubble and other guiding materials such as lime from the construction of neighbouring properties! 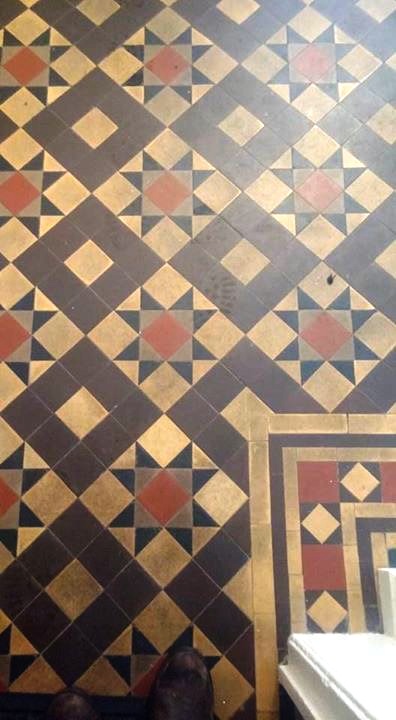 Whilst talking to the customer he mentioned that he had some old quarry tiles in his kitchen that he also wanted cleaning, however I’ll cover that in another post. To continue I produced a quote for the work which was accepted and a date was agreed for me to return with all the equipment and products required.

To clean the Victorian tiles in the reception area I applied a medium dilution of Tile Doctor Pro-Clean and left it to soak in for ten minutes. I then set about scrubbing the solution into the tiles using a series of Diamond impregnated burnishing pads ranging from 100-400 grit.

Once the whole floor had been treated in this manner it was thoroughly rinsed with water using a wet and dry vacuum to extract the now soiled cleaning solution and I was able to see that the process had really brought the tiles up a treat.

Concerned about the damp readings I had experienced earlier I decided it would be prudent to give the floor an Acid Rinse with Grout Clean-up to counteract any potential salt issues (efflorescence) that can be a real problem on these old floors which have no Damp Proof Course. I highly recommend this step on old floors as salts can over time permeate through the tiles and the cleaning process draws them to the surface. Left unaddressed the salts can damage the sealer and leave the floor looking far from its best.

Once the tiles had been cleaned, I rinsed the entire floor thoroughly using fresh water to remove any trace of cleaning products, before leaving it to dry off completely overnight.

The following day I returned and after rechecking the moisture levels to ensure that they had adequately dried out I started to seal the Victorian tiles in the reception area. To improve colour, I first applied a coat of Tile Doctor’s Colour Grow, a solvent based impregnating sealer which picks out and enhances the natural colour of the tiles, not only bringing the whole floor to life but helping to disguise any damage the floor has suffered over the years. After this coat had dried sufficiency four coats of Seal and Go were applied to finish off the floor and give it that ‘wow factor’.

The customer was thrilled and left the following feedback on the Tile Doctor feedback system:

“The work was carried out in a professional manner, with excellent results.”

For aftercare I left the customer with some guidance on care and maintenance of the floor as well as a suitable bottle of tile cleaner.

Professional Renovation of a Victorian Tiled Reception Floor in Devon

Hidden underneath a lot of grime and staining in the basement of a building of special interest (Grade II-listed) in Plymouth is a fantastic Limestone tiled floor that was originally sourced from a local quarry near the city.

The floor had been hidden under a covering at some point in its history, but for at least the last decade it had been used to house dogs. As far as the new owner of the building could tell, the floor had never once been cleaned! To worsen the situation, the floor had also suffered from damp during winters and periods of heavy rain.

The customer got in touch because the suggested solution that was accepted by the council was to install an expensive floating floor on top of the limestone and hide this lovely feature. I produced a report on the floor about how the design of the traditional floors worked, plus my findings and recommendations which was passed to the council. The recommendations to re-grout in a natural lime mortar, mill the stones to lift any grime and improve any mild undulation and lippage to help with any pooling issues and to seal the floor in a breathable sealer were endorsed. 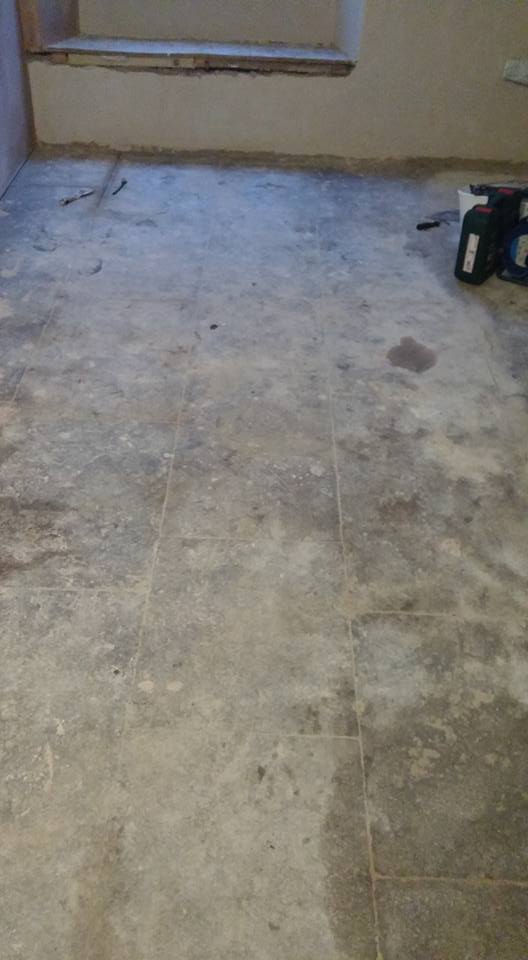 The first job was to rake out all the existing grout, an inappropriate patchwork of cement and lime which had been completely scuffed away in parts and was contributing to the damp issues by preventing the floor from working how it was designed to (moisture permeates evenly through the lime-based grout and evaporates into the house due to the heat of the people living there). The grout, or pointing, was then replaced with lime mixed with a ratio of 1:3 with sand which is what would have been used originally, allowing the floor to ‘breathe’.

Following this, a process called milling was used which uses diamond-impregnated discs to cut the surface of the stone back and strip the stone, opening the pores to remove any stains as well as flatten any stones out where necessary.

After successfully removing the grime and stains on the surface of the floor, it was necessary to seal the stone to protect it against ingrained muck in the future.

To do this, I used Tile Doctor Colour Grow, which is our colour-enhancing, breathable sealer which prevents moisture from becoming trapped. Additionally Colour Grow is an impregnating sealer that penetrates and fills the pores of the stone to block dirt and stains becoming trapper there, it also leaves an aesthetically pleasing natural look finish which really suited the character of this Limestone tiled floor. 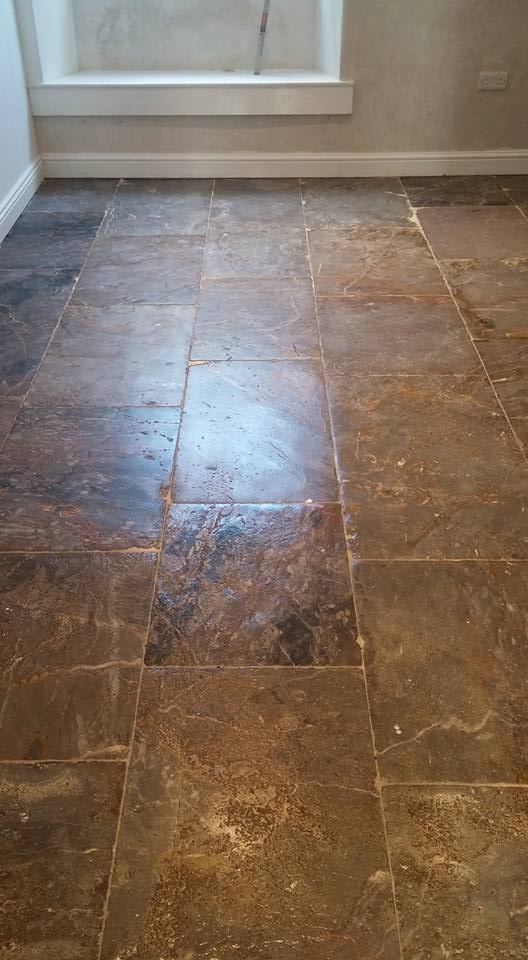 It took some work and once done the floor looked fantastic, certainly the new property owner seemed to think so – he was exceptionally happy to have this fantastic feature back to looking its absolute best and left the following feedback.

“Stuart completed the restoration of a stone floor within a Grade II listed building. He completed milling and polishing of the 200 year old stones over around 50m2. The outcome of the work was amazing; the floor was transformed from a dull grey colour to a finish like marble. Great service provided and looking forward to working with you on again on the next project.”
Mr J. Yorke, Plymouth

Professional Restoration of Limestone Floor in a Listed Building in Plymouth 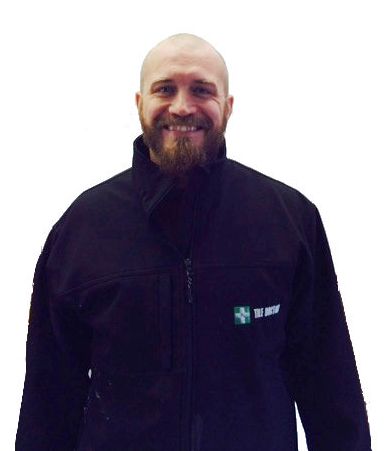